Angel was in an Accident

“Angel was in an accident last night.”

The woman speaking to me in front of my son’s elementary school looked tired. Not I-stayed-up-too-late-last-night tired, but my-whole-life-has-been-exhausting tired. I know this look well. I’ve seen it all too often here in Mazatlán, Mexico, on lined faces, prematurely aged by the life-sucking vacuum that is poverty.

“Angel was riding his bike fast. He didn’t want to stop at the street, so he looked back to see if a car was coming. He wasn’t looking in front of him, and he hit a car. It was parked, thank you, God. The man who lives in front saw him flying through the air. You should see his face—all shredded, broken tooth.” She sighed.

“We had to take him to the hospital, but we don’t have a car, and it was too late to ride the bus. I asked our neighbor to take us, but his car wasn’t working. He called a taxi. The taxi took forever to come, while poor Angel sat their bleeding. He didn’t even cry.”

“I could have taken you,” I protested. I have a car. I live a block and a half away from this woman.

“It wouldn’t bother me to take a bleeding child to the hospital!”

She ignored my admonition. “The doctor says that Angel is malnourished. He gets these spots that just appear on his body. I don’t know what causes them. The doctors want to do more tests, but how much is that going to cost?” She said goodbye and walked away, shoulders hunched.

As I walked home, I found myself tracing a familiar thought path. What do I do? I don’t know what to do. How can I help? How should I help? What is compassion? What is enabling? My heart breaks for Angel, an awkward pre-teen with no father figure. Angel is quick to give bear-hugs, but often looks sad. His weight is healthy, but if he is indeed malnourished what does that mean for his brain development? Does he stand a chance of advancing beyond menial jobs, living paycheck to paycheck?

Here is my confession as a pastor and a missionary. I don’t know what I’m doing. Most of the time, I feel like I’m bad at my job. When I complain about this to God, I always feel his my-grace-is-sufficient-for-you love. He’s the best boss I’ve ever had.

I saw Angel later. I was relieved to see that although he had some road rash on his face, he didn’t look as banged-up as I imagined. He smiled at me shyly, running his tongue across the small chip on his front tooth. Then he turned and ran away, fading out of sight, a shadow swallowed by the darkening sky.

In Her Own Words: My husband Kyle grew up planning to be a doctor. He met Jesus late in high school. Our first year in college, we went to a church planting conference. He very clearly heard the Holy Spirit tell him that he would be a church planter in Latin America. He argued for a while, and eventually gave in. In the 12 years that have followed, he hasn't looked back. When we told me his new plan, I was thrilled. I never saw myself as a doctor's wife. We got married, finished out degrees, and spent 9 months in training at our local church. In the summer of 2007, we loaded up my grandpa's pickup and moved to Mazatlan, Mexico.

Seven years later, we have three small children and a bustling church in the middle of a low-income neighborhood. We consistently meet women who think they need to be perfect before they can connect with God. Poverty puts people in difficult situations, and many have made choices they aren't proud of as a result. Our church motto is "Imperfect people full of Jesus' love." Over and over again we find ourselves explaining God's wonderful, amazing grace. My favorite part of ministry is watching people hear from the Holy Spirit. 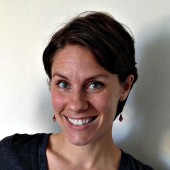 Would you know my name?

The Hollywood Version Versus Real Life

God Is Good ALL The Time