The twinkling lights, the trees, the music, the sweets, the candles, the movies, the shopping, the wrapping, the baking, the decorating. There are so many things about Christmas that we love, it’s a special and magical time of year for gift giving and being with family. With all the sights and sounds it is like a million small ways asking you to look around, slow down, enjoy it all before it’s all over.

So often it seems we are missing those sights and sounds and smells because we are running from one thing to the next, constantly complaining about our full schedules and yet always adding just that one more thing. It is no wonder we are missing the small moments. We are working so hard to create the life we want, all the while missing the one that we have.

Every year I choose one word that I am going to focus on for that year, you may do the same. One idea that you are going to focus on that year because you feel the Lord has asked you to, because you know you may be weak in that area, or any number of reasons. I love the idea of just a word because it takes away the complication of trying to change everything about myself that needs changing, which is much. I can focus on just that one idea, always bringing my mind back to it throughout the year.

Last year I was in a funk. You know the one where you don’t understand what God is doing, why He is not showing you, where nothing is going the way you thought it would and your life could be described as “frustrating”, to say the least. I didn’t like much and could easily give you a list of twenty things that needed to change, and the faster the better.

As I began to think of which word I would choose for the New Year I was hoping for a word like, “change” or “adventure” or “inspire” something that showed all that the year would hold that would take me to that place I was so frustrated I was not presently in. Instead I felt the Lord wanted me to focus on the word “thankful”. “Thankful?” I might as well have rolled the eyes of my soul in unholy disgust. What do I have to be thankful for here? And slowly God began to reveal to me that this was exactly why I needed that to be my word.

On December 26th, the day after all the celebrating and fun had commenced my son began to talk to me about other toys that he wanted. What about that other things that he hadn’t received? As any good mother, I began to use it as a teaching moment. “What are you talking about? You just opened so many great gifts you also asked for! You haven’t even had a chance to enjoy what you have already been given before you are asking for something else? You aren’t even thankful!” And as God has a habit of doing when I am lecturing my children, it becomes instead a lecture for me from Him, delivered out of my own mouth. And I hear Him confirm in my heart, “And that is you as well, Ashley. You aren’t even thankful or enjoying what I have already given. Stop, reflect on all I have given you, and enjoy it.” Ouch.

Slowly I began to make myself look for all that God was doing, all He had already done on my behalf and thank Him for those things, and not constantly whine over what He had yet to do. My heart began to change and an awareness for my life, in this moment, and all God had given me was filling me with joy and contentment. Now, don’t let me fool you, I forgot time and time again about my thankfulness project, even up until recently as the year started to end when I was feeling down and frustrated, once again. But every time I made myself make a list of all the wonderful gifts already in my hands, my heart would relax as I remembered God’s faithfulness.

How frustrating to watch an ungrateful child throw good, time, money, heart spent gifts, to the side in search for the next better thing. Always striving for the next, bigger, better moments and things. We may not have everything we need or want in our hands, but surely we have something. Our hands are not empty because we have a good Father. What are the things we once asked Him for that we now have? What are the small things and ways we see Him caring and providing for us?

We only have so many Christmas times, so many days having young children to wake us up early, teens we drag out of bed, grand kids to spoil, and then they are gone, forever. Never again will this Christmas of 2016 be here, with all these sights and smells and hugs and moments that are etching beautiful memories into our hearts and minds. Let’s choose thankfulness and be present with the ones we love, living in today and not just anxious for tomorrow. 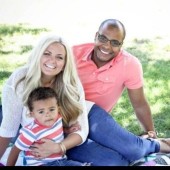 Ashley Morgan Jackson is a wife, mother, blogger, and creative. After struggling with depression in isolation for many years she now shares openly about her journey and how a "good girl" learned what grace was through her brokenness and inability to fix herself. Constantly learning she needs less of herself and more of Him. Lover of all coffee, getting her groove on, laughing hysterically, podcasts and Jesus.

Welcome to a New Season of BOLD Spiritual Growth!

Are We Refusing Refuge?

When Not Following A Formula Is Hard