Calling. It is a bit of a buzz word in Christian culture today. And for everyone of us who gets passionate about the subject of our “calling” I believe there are at least as many of us who get annoyed, or discouraged, or feel shame.

I know because that used to be me.

Not very long ago I was standing on the annoyed-discouraged-shamed hill looking over at the perceived “called” ones, all joyful and fulfilled on their hill, and I couldn’t figure out how to cross the space in between. And honestly, I didn’t know if I wanted to. Something felt flashy and superficial about those pretty “callings” and something felt a little more holy and gritty down here in the martyred trenches of “real life.” “Oh brother,” I would think. “Who has the time or energy for a calling? My calling is to keep these kids alive. My calling is to not kill my husband. Maybe I can muster the ambition to read the Bible after I catch up on sleep/housework/laundry/ (fill in all the blanks to infinity). Is that a calling? Whatever.” And I was prideful. And I was jealous. And I was anemic and desperate for an adventure with Jesus that would rescue me from my hill.

And then I realized that I didn’t have to cross the chasm between the hills. I did not have to tumble down one side and scale the other. There was no magical bridge spanning the distance.

There was a door. And it was open.

You see, when I did get that Bible out, I couldn’t get away from the idea of calling, of fruitfulness, of this whole thing having to turn outward at some point to really be the point.

“This is to my Father’s glory, that you bear much fruit, showing yourselves to be my disciples.” John 15:8

“You did not choose me, but I chose you and appointed you so that you might go and bear fruit- fruit that will last -and so that whatever you ask in my name the Father will give you.” John 15:16

“For we are God’s handiwork created in Christ Jesus to do good works, which God prepared in advance for us to do.” Ephesians 2:10

“Go and make disciples of all nations, baptizing them in the name of the Father and of the Son and of the Holy Spirit, and teaching them to obey everything I have command you.” Matthew 28:19-20

“The harvest is plentiful, but the workers are few. Ask the Lord of the harvest, therefore to send out workers into his harvest field. Go!” Luke 10:2-3

So, the open door… I began praying earnestly, humbly about my “calling,” my “what else,” my “fruitfulness,” my “good works.” I had to lay down the mantle of harried stay-at-home mom just trying to get a shower. I had to put down the shovel that was digging me further into the trenches of martyrdom, and genuinely ask.

He does that, you know. When we shut up for a moment with all of our complaining and justifying and whining (or is that just me?), He likes to speak to His children. He likes to let us in on His plans for our lives, even if it’s just a little sliver at a time. He has a lot to say to a humble, quiet, seeking, patient, surrendered heart. He told me some things He wanted to do in my life. He spoke clearly into my calling and He told me the things I would do (and with that so many things I would not do. For every yes there is a no).

The first open door I had to walk through was to choose believe it.

My first open door off of the fruitless hill of shame and discouragement was simply belief. And I didn’t just secretly believe it in my heart. Y’all, I wrote it down on the last page of my journal. I boldly proclaimed in black and white, “I will be: ___, ___, and ___.” Next He invited me through the open door of telling another human being what I thought my calling was. Guts much? I mean that feels risky, and presumptuous. It feels like you are officially turning in your uniform, your allegiance for one team and bravely putting on a new one. And what if it doesn’t happen? And what if I look stupid? And what if they judge me (you know, like I had been judging so many others before)? It was a risky door down the corridor of calling but I timidly stepped through.

And before I knew it, there was another door opening to me, and another. Not flashy doors. Not doors that led to huge stages or followings or fame. But new doors that led to fresh air and another “yes” from the Lord. And it struck me that it just may be this simple. Our calling just may be to walk through the open door in front of us. I don’t think we need to manufacture the door, or crow-bar it open, just step through. Maybe it gets super complicated when we spend more time looking at someone else’s calling rather than at the door standing in front of us.

Lately I have been reading through the Old Testament, following Abraham’s decedents, the Israelites, from promise, to slavery, to rescue, to wandering, to Promised Land. God tells his people over and over that He will give them this land, that He will go before them and fight their battles, that they are to be strong and courageous and take their Promised Land. But then I came across a few interesting verses in Deuteronomy 2. Moses is recounting the 40 years in the wilderness and he says that God finally told him they were ready to head to Canaan, their Promised Land. Along the way God says, “Give the people these orders: ‘You are about to pass through the territory of your relatives the descendants of Esau, who live in Seir. They will be afraid of you, but be very careful. Do not provoke them to war, for I will not give you any of their land, not even enough to put your foot on.” (Deut. 2:4-5). He says a similar thing about the Moabites in verse 9 declaring, “I will not give you any parts of their land,” and about the Ammonites in verse 19 saying, “I will not give you possession of any land belonging to the Ammonites.”

I find these verses so interesting in the middle of all the “TAKE THE PROMISED LAND! DO NOT BE AFRAID! GO FOR IT!” pep rallies. God is saying, “This is the door I have opened for you. This is what I have called you to. This is your Promise. Right here. Come this way. But be careful… That is their land, that is their’s to possess, not yours. That is what I have called them to.. You can’t have that.”

Do you remember the scene from “Monster’s Inc.” with all the doors? There were certain doors for certain monsters to walk through, leading them to their own jobs. I think heaven may have a room like that. Each of us have doors with our names on them, with our calling behind them, with fruitfulness waiting on the other side. And just like in the movie, chaos may ensue when we are swinging around in the maze of everyone else’s doors… all the while ours is ready and open for us. It may be a small door and you may not even recognize its threshold as you sit at that lunch, answer that call to serve, intercede for that injustice, do that thing that just comes naturally. But until you walk through the first one, you won’t see the next.

So if you are still on the seemingly “un-called” hill, know that really you are not. If you can’t find an open door right now, then use this waiting time to train. Read books about what you want to do/gets you fired up/feel passionate about/are good at. Pray. Follow along as someone walks that path ahead of you. That way, when the door does open, you aren’t starting at a 0. You will be strong and ready. God does His best training in the waiting.

And if you have timidly wrote a big dream in the back of your journal then under it write Matthew 7:7-8: “Ask and it will be given to you; seek and you will find; knock and the door will be opened to you.. For everyone who asks receives, the one who seeks finds; and to the one who knocks, the door will be opened.” Believe it. And I challenge you to tell someone. Scary? Yep. But Hebrews 10:38 says, “But my righteous one will live by faith. And I take no pleasure in the one who shrinks back.” He takes no pleasure in our bitterness, in our envy, in our judgement, in our discouragement… It is to His glory that we bear much fruit. So take a step through your door, timidly, boldly, just step. And cheer someone else on as they walk through theirs. Like so many things in the Christian faith , it is not easy, it take guts, but I think it is much simpler than we’ve made it. And remember:

“The one who calls you is faithful, and HE WILL DO IT.” I Thessalonians 2:14 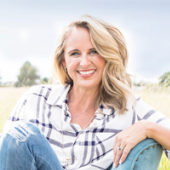 Lesley Ryden is the wife of the boy next door (literally), momma to 4 blue-eyed children, part-time homeschooler, and wannabe homesteader on her little "Ranchito" way out in West Texas. As she sent her last baby off to kindergarten this year, she felt called to revisit her love for writing and embraced this new adventure in her life. She is a blogger, an encourager of women, and a teacher of the Word of God. Lesley is most passionate about gathering her tribe, honoring her kid's childhoods, creating spaces for deep relationships, and pressing in boldly to the power of prayer.

Quieting the Voice of Condemnation

Time to Check Out My Own Actions and Attitudes

He Is Making All Things New

What Will You Do With Your Life?