Quieting the Voice of Condemnation

I stared at the photograph. Pin up hair, lingerie, 5 inch heels and piercing eyes. This picture, so easily accessible through the internet.

Just when I thought my haunting past had tired, there it was to whisper condemnation in my ear again.

I was engaged to be married to a man who had waited for me. And here was blatant evidence of my unfaithfulness to him and most importantly, to God.

The evidence that screamed, “You are filthy!”

I called my groom, shaking and crying, to reveal to him that his fiancés body was exposed on the internet. A painful call that felt almost unfair to make, though I know the consequences of my sin were just.

He responded most graciously. I should have known. His actions often display Jesus’ gentleness.

But I still felt condemnation breathing down my neck, placing heavy lies upon my shoulders.

God pierced through the cloud of sorrow. This girl before me was not me. She was filthy, but I had been cleansed. (Isaiah 1:18). She was dead, but I had been made alive in Christ. (Ephesians 2:1-5). She had become unrecognizable to my unveiled eyes.

Because I am a new creation.

Therefore, if anyone is in Christ, he is a new creation. The old has passed away; behold, the new has come. (2 Corinthians 5:17 ESV)

The enemy of our souls likes to drown us in the memory of our mistakes. He seeks to cause us to be defeated. To feel as though God could never forgive us, let alone use us for his glory.

But these are blatant lies.

If you have turned to Christ and trusted in him for salvation, you are new. You must put off the temptation of dwelling on the past and walk as a vessel of mercy, created to glorify your Creator. (Romans 9:23).

Every ounce of your sin was laid upon the Savior. He bore your sin in his body on the cross, and all of the wrath you deserved was poured out on him. (1 Peter 2:24). There is no wrath left for those in Christ!

This is why the Christian can sing, “No condemnation now I dread! Jesus, and all in him is mine. Alive in him, my living Head. And clothed in righteousness divine.”

There is therefore now no condemnation for those who are in Christ Jesus. (Romans 8:1 ESV)

Walk in the Newness of Life

When we are faced with condemnation which no longer belongs to us, we must allow it to bring us to our knees in worship rather than in shame. We are the forgiven children, called to walk in the newness of life.

Your past sin doesn’t disqualify you from glorifying God.

Let your past draw you near to God in thankfulness as you move forward in obedience. Praise him for the new life he’s given you in Christ, and watch him work through you as he builds his Kingdom.

We were buried therefore with him by baptism into death, in order that, just as Christ was raised from the dead by the glory of the Father, we too might walk in newness of life. (Romans 6:4 ESV) 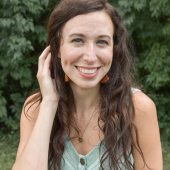 Brittany is a follower of Christ and a wife to James. She strives to write from a place of transparency and hope and thrives on seeing women open up their hearts to The Savior and to other women around them.

When I Put Growth On Hold